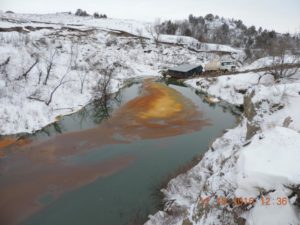 The leaky pipeline has spilled more than 176,000 gallons of crude oil from the Belle Fourche pipeline into the Ash Coulee Creek located about two and a half hours from the DAPL camp site. Estimates suggest that 37,000 gallons on oil have been recovered in cleanup efforts.

A landowner discovered the spill on December 5 in the southwestern community of Belfield, according to Bill Suess, an environmental scientist for North Dakota. The pipeline was temporarily shut down to repair the rupture and contain the leak within hours of its discovery. It’s unknown why the electronic monitoring equipment failed to detect the pipeline rupture.

The 6-inch steel Belle Fourche pipeline is mostly underground but was built above ground where it crosses Ash Coulee Creek. The pipeline was built in the 1980s and is used to gather oil from nearby wells to a collection point.

Suess said the discharge migrated almost six miles from the spill site along the creek, contaminating private and federal forest land along the waterway. The creek feeds into the Little Missouri River, but it appears that the oil didn’t travel that far. No drinking water sources were threatened, according to Suess.

Haz mat crews have been averaging about 100 yards daily in their cleanup efforts. Some of the oil remains trapped beneath the frozen creek. Remediation efforts may not be complete until spring. The company has hired a Canadian consulting company that specializes in cold-weather oil spill cleanups, according to Suess.

The Belle Fourche pipeline is operated by True Cos. of Casper, Wyoming. The companies operate at least three pipeline companies throughout North Dakota, Wyoming and Montana. The companies have a lengthy history of oil-related spills, including a January 2015 pipeline break into the Yellowstone River which resulted in a temporary shutdown of water supplies in Glendive, Montana after oil was detected in the city’s water treatment system. Since 2006, True Cos. have reported 36 spills totaling 320,000 gallons of petroleum products, most of which was never recovered. The companies have been the target of 19 enforcement activities by federal pipeline safety regulators since 2004, resulting in over a half million dollars in proposed penalties.

The potential for a damaging pipeline leak is at the heart of the Dakota Access pipeline dispute. Standing Rock Sioux and other tribal members have joined efforts with environmentalists to fight the controversial DAPL project on the grounds that it crosses beneath Lake Oahe, placing the water source in jeopardy to Native Americans while destroying sacred land.

The U.S. Army Corps of Engineers announced in early December that it would not grant an easement to Energy Transfer Partners to complete the final portion of the $3.7 billion Dakota Access pipeline. Jo-Ellen Darcy, the Army’s Assistant Secretary for Civil Works, indicated that alternative routes should be explored. The Dallas-based company remains committed to the project and unwilling to re-route the 1,172-mile long pipeline, which is nearly 92% complete.

Energy Transfer Partners has assured regulators that the Dakota Access pipeline would include safeguards including leak detection equipment while remote workers monitoring the pipeline from Texas could close valves within three minutes if a breach is detected.