No Letup in Drilling Requests for Oklahoma’s STACK 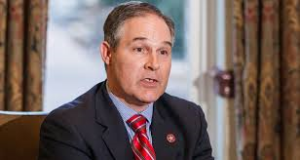 Oklahoma Attorney General Scott Pruitt’s already giving an indication of the changes coming at the Environmental Protection Agency if and when he is confirmed to be the new chief administrator.

In a Thursday morning interview with Radio Oklahoma Network affiliate KWON, Pruitt explained his fight with the EPA is based on overreach.

His comments were made hours before Donald Trump’s transition team made the official announcement of Pruitt’s nomination to be EPA administrator. But Pruitt gave a strong indication of what the country can expect from him.

“Each of the respective bodies of our government, the separation of powers we know in the constitution, from legislative to executive are going to stay in their lanes,” he commented. “The vertical separation of powers we know between Washington, D.C. and states will be respected and enforced, and that’s a new day and it’s gonna be encouraging, I think, to folks across the country.”