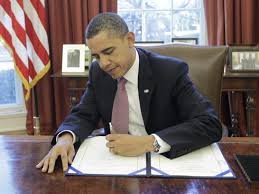 When President Obama recently put his name to the WIIN Act, he also formally signed into law the historic water agreement that allows Oklahoma City to have legal access to Sardis Lake for drinking water from the Chickasaw and Choctaw tribes.

Although the agreement was reached last summer and announced by Gov. Mary Fallin, it still needed congressional approval as well as the signature of the President. The Water Infrastructure Improvements for the Nation Act has $10 billion in water measures including money to help the state of Oklahoma with its water supply problems.

U.S. Sen. Jim Inhofe was one of those responsible for pushing the legislation through Congress.

“Another integral aspect of this bill is the assistance it provides to disadvantaged and rural communities in Oklahoma by helping those communities comply with the Safe Drinking Water Act,” said Inhofe. “I am proud of the bipartisan efforts that got this bill across the finish line and I look forward to seeing the benefits to Oklahoma in action.”

The funding for Oklahoma also includes money to help rehabilitate the aging levee system in Tulsa. Officials say it will mean $2 billion in infrastructure and help protect more than 10,000 residents.

The WIIN Act also will prevent the deauthorization of the planned deepening of the McClellan-Kerr Arkansas River Navigation System. The measure will also settle easement disputes between the U.S. Army Corps of Engineers at Grand Lake and some Oklahoma electric cooperatives.