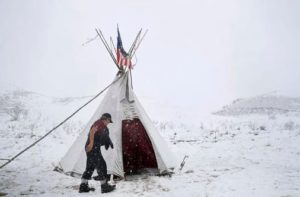 For the Indian activists, the decision by the Army Corps of Engineers to halt construction of the nearly-completed Dakota Access Pipeline could be a short-lived victory. The unanswered question is: What might Donald Trump do once he becomes President?

Industry leaders want him to make it a top priority next month to go ahead and approve completion of the four-state $3.8 billion pipeline opposed by the Standing Rock Sioux tribe in North Dakota. The tribe contends the 1,200 mile pipeline threatens drinking water and cultural sites.

Trump supports construction of the pipeline, spokesman Jason Miller told The Associated Press on Monday, but Miller wouldn’t say whether Trump would reverse the Army’s decision.

“We will review the full situation when we’re in the White House and make the appropriate determination at that time,” Miller said.

The Sunday announcement by Assistant Army Secretary Jo-Ellen Darcy does not actually deny an easement for the project, but says additional review is needed. That means the pipeline company cannot file an appeal because the project was not formally rejected.