Oil and Gas Rig Counts Grow in Oklahoma and U.S. 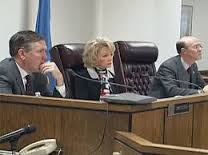 The group seeking a $16 billion bribery refund from ATT over a 1989 bribed vote on a rate case is asking the Oklahoma Supreme Court to order an evidentiary hearing to examine all of the facts surrounding the bribed vote by the Corporation Commission that allowed ATT to keep millions in excess revenue and not return it to consumers.
The legal filing made Friday afternoon is considered a challenge of a Corporation Commission vote in September 2016 not to press ahead with the matter.

The motion was filed by Oklahomans Against Bribery and in announcing its filing the group said, “Of particular interest is evidence of alleged payoffs, fraud, conspiracy, perjury and cover-ups by numerous officials of ATT, as well as fraud on the Supreme Court itself.”

The case before the Commission in 1989 was PUD 260 and involved Corporation Commissioner Bob Hopkins accepted a $10,000 bribe for his vote. He and an ATT attorney were later convicted of bribery and sent to federal prison.

In Friday’s motion, the applicants quote a 1993 filing in which then-Attorney General Susan Loving told the Oklahoma Supreme Court, “Justice demands that any decision in this case be rendered in light of the whole sordid factual picture.”  At the time however, the Court was only deciding whether the fact that Commissioner Bob Anthony had given his bribe money to the FBI meant that he was now biased against Southwestern Bell and couldn’t hear future cases involving the company.  (The Court decided he could.)  The applicants argue it is now time for the Court to learn all the facts.

The applicants also quote a ‘Certificate of Record’ filed last month by OCC Chairman Bob Anthony in which he warns the Supreme Court about “numerous omissions and misstatements” in the record of the bribery refund case that should be corrected before the Court relies on that record to render a decision in the applicants’ appeal.

Under a unique provision of Oklahoma’s Constitution, in appeals of decisions from the OCC, the Supreme Court must order an evidentiary hearing when violations of constitutional rights are alleged and the Court finds more evidence is required to determine if such violations have indeed occurred.

In their motion before the Supreme Court, the bribery refund applicants contend the constitutionally-guaranteed due process rights of all Oklahoma ratepayers were violated first, when AT&T bribed Commissioner Hopkins (bribery being explicitly forbidden in the Oklahoma Constitution), and second, when without ever hearing the applicants’ evidence, the OCC dismissed the application seeking to overturn the bribed vote.  Commissioners Todd Hiett and Dana Murphy voted to dismiss the bribery refund application in September 2016, almost a year after it was filed and just days after the U.S. Department of Defense and Federal Executive Agencies asked to join the case.  It is that decision that the applicants have appealed to the Oklahoma Supreme Court.

The applicants also argue that because the Supreme Court has the authority to “declare void” a decision by the OCC when it is “repugnant” to the constitution, the Court needs to know the full extent of the wrongdoing surrounding the bribed PUD 260 decision to determine if it is indeed repugnant.  In various filings, the applicants have repeatedly hinted at evidence suggesting efforts by numerous AT&T officials to influence many at the OCC involved in the bribery case well beyond the voting commissioners.

The original bribery refund application filed in September 2015 cited FBI tape recordings, newly unsealed depositions and other records that appear to contain explosive evidence of payoffs, fraud and cover-ups by AT&T attorneys, lobbyists and executives both at the OCC and at the Oklahoma Supreme Court.  AT&T has always denied involvement in the corruption, claiming it was all the work of an outside attorney, and neither the OCC nor the Supreme Court has ever allowed evidence of the wider fraud to be presented under oath.  The applicants again quote former Attorney General Susan Loving who told the Court, “The evidence … contradicts and rebuts [AT&T]’s denial of wrongdoing and shows that, in fact, the very highest level of [AT&T]’s Oklahoma management was aware of such wrongdoing.”

In his recent filing to the Court, Commissioner Anthony specifically cited gifts to OCC staff of “Christmas hams, turkeys, O.U. football tickets, tailgate parties, personalized day planners, cash loans, retirement presents, spousal travel expenses to conferences, $500 for a church mission trip, and a new suit of clothing, among others.”  He also mentions “‘walking around money,’ bribes, ghost employee or ‘no-show job’ for a spouse, $15,000 toward a new car, and favorable loan arrangements at a bank.”