First Real Blast of Winter coming Wednesday to the State 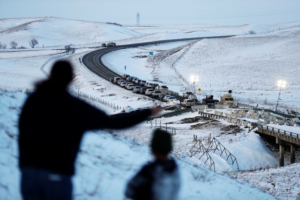 While Hollywood celebrities and Native Americans are celebrating the Obama administration’s decision to stop construction of the Dakota Access pipeline in North Dakota, the pipeline owners are denouncing the decision.

Energy Transfer Partners, L.P. and Sunoco Logistics Partners L..P. called it a “purely political action” by the Army Corps of Engineers not to grant an easement. Assistant Secretary for Civil Works, Jo-Ellen Darcy said her decision was based on the need to “explore alternate routes” for the pipeline’s crossing.

“This is nothing new from this Administration, since over the last four months the Administration has demonstrated by its action and inaction that it intended to delay a decision in this matter until President Obama is out of office,” said the companies in a statement in reaction to the Sunday afternoon announcement.

The two firms said that, “For more than three years now, Dakota Access Pipeline has done nothing but play by the rules.” And the companies noted that even the U.S. Army Corps of Engineers has made the admission.

“The White House’s directive today to the Corps for further delay is just the latest in a series of overt and transparent political actions by an administration which has abandoned the rule of law in favor of currying favor with a narrow and extreme political constituency.”

Most of the $3.8 billion pipeline construction is finished with the exception of putting the line under Lake Oahe, a Missouri River reservoir.