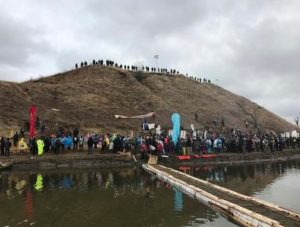 No doubt about it. The top story in 2016 in North Dakota dealt with oil—-specifically the Dakota Access Pipeline and the protest by Native Americans from the Standing Rock Indian Reservation.

Their protest that started last spring attracted the attention of Hollywood celebrities and supporters from Oklahoma and numerous other states.

The $3.8 billion pipeline being built by Energy Transfer Partners was stalled as the firm attempted to build it under Lake Oahe in southern North Dakota. Members of the Standing Rock Sioux tribe claim it threatens sacred sites and a nearby river that provides drinking water.

The resulting protest led to the arrests of more than 500 protesters as well as cries of inhumane treatment after police used tear gas, rubber bullets and water hoses in freezing weather to keep demonstrators from approaching the construction area.

Many of the protesters decided to leave in the middle of December after the U.S. Army said it would not grant permission to complete the pipeline. Mother Nature also intervened with several snow events and temperatures that plunged into double digits below zero. Several hundred demonstrators remained as the new year approached.