Economies Still Lagging in Oklahoma and 8 Other Midwest States 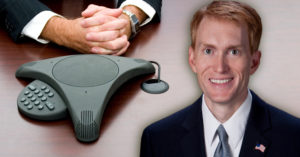 While OPEC’s decision to cut oil production for the first time in 8 years won’t take effect until Jan. 1, Sen. James Lankford says it’s an indication the OPEC countries are suffering.

“It signals to the world that many nations like Russia,Saudi Arabia and Venezuela are starting to feel the real pressure of these down oil prices,” he said in an interview with OK Energy Today. “And they’re trying to find a way to raise oil prices worldwide because their economy is struggling dramatically under these low oil prices.”

Lankford sits on the Homeland Security Committee in the Senate and oil prices and production are part and parcel of the nation’s security.

“When oil prices are around $40 a barrel and their budget is based on oil prices being $70 a barrel, they can’t sustain that long term even in a nation as wealthy as Saudi Arabia,” added the Senator.

“They’re trying to find a way to limit production. Now the production limits they’re putting on is about one percent reduction of oil output worldwide, now we’ll see if OPEC can be able to keep their agreement, knowing that all these nations—–there really is no way to enforce it on the nations.”

As announced by OPEC, the 14 countries agreed to cut production by 1.2 million barrels a d ay or 1 percent of the total global oil production. Non-OPEC countries such as Russia signaled they are prepared to participate in the agreement as well.

Listen to part of Jerry Bohnen’s interview with Sen. Lankford.