WTI, Brent Crude Rebound With Settlements Above $50 on Thursday

Hamm: Tribal Members Being Used by ‘Fringe’ in DAPL Standoff 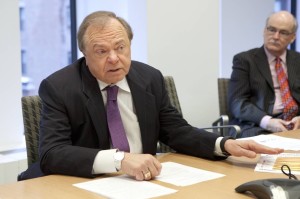 Oklahoma’s billionaire oilman, Harold Hamm, sounded off on Thursday, citing a fringe element is responsible for stirring up controversy at the site of the Dakota Access Pipeline protest in North Dakota.

President-elect Donald Trump’s key energy adviser questioned the motivations of protesters who are behind the standoff to halt construction of the controversial pipeline.

“Let me tell you, they are being used, they are being taken advantage of,” Hamm said of the Standing Rock Sioux tribe. “I hate to see it,” he said on Thursday at the Platts Global Energy Outlook Forum in Lower Manhattan.

While Hamm insists he has nothing to gain in the dispute, Continental Resources could indirectly benefit from the completion of the Dakota Access Pipeline.

In a recent presentation, Hamm told investors that the price gap between Continental’s Bakken crude and more expensive forms of oil should decrease with increased pipeline capacity.

“My goodness, that’s a pipeline that is certainly needed,” said Hamm. “It brings the best, highest quality crude oil from the Bakken to the population centers.”

The Standing Rock Sioux claimed a temporary victory on Sunday when the U.S. Army Corps of Engineers denied a permit for the pipeline, forcing Dallas-based Energy Transfer Partners to find an alternate route.

The area has been occupied for months by Standing Rock Sioux tribal members and allies who oppose the 1,172-mile, $3.8 billion Dakota Access pipeline.

“I think he sees it coming to an end,” said Hamm. “I think they realize there’s been some fringe aspects that have come to be involved that are not serving them well. That needs to come to an end.”