Will Rex Tillerson Become the Next U.S. Secretary of State? 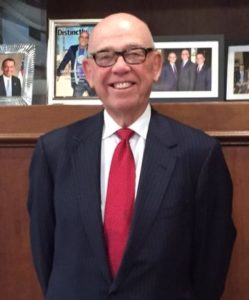 Alva native Tom McDaniel will receive the 2017 Leadership Oklahoma Lifetime Achievement Award at the organization’s annual Excellence in Leadership Gala to be held at Southern Hills Country Club in Tulsa on Saturday, April 1, 2017.

“Each year, Leadership Oklahoma recognizes the outstanding contributions of Oklahoma corporate and individual leaders for their commitment and service to elevating the quality of life and empowering our state for greater prosperity,” said Marion Paden, president and CEO of Leadership Oklahoma.

The Lifetime Achievement Award recognizes individuals who have used their leadership abilities to improve the quality of life for Oklahoma’s citizens and its future generations.

McDaniel became president of American Fidelity Foundation in September of 2011 after serving as president and chancellor of Oklahoma City University from July of 2001 to August of 2011. McDaniel retired as vice chairman and director of Kerr McGee Corporation in 2000 and then served as president of Northwestern Oklahoma State University, becoming the first graduate of that school to ever serve as its president, before joining OCU. Prior to Kerr McGee, McDaniel served as Administrative Director of Courts for the State of Oklahoma. He holds a business degree from Northwestern, a juris doctor from the University of Oklahoma and an honorary doctorate of humane letters from OCU.

McDaniel is active in the community, serving on numerous boards and commissions. He currently serves as chairman of the Citizens Advisory Board for MAPS 3 projects. He was recently named Oklahoma’s Most Admired CEO in large non-profits and was the recipient of the Dean A. McGee Award from Downtown OKC, the Urban Pioneer Award and OKCityan of the Year Award. McDaniel has been included in the Oklahoma Higher Education Hall of Fame. In 2006, he was inducted into the Oklahoma Hall of Fame.