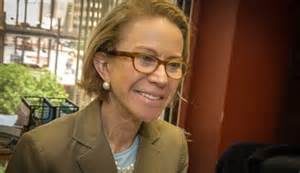 While Oklahoma Attorney General Scott Pruitt’s among those reportedly being looked at to take over the Environmental Protection Agency in a Donald Trump administration, so is Kathleen Hartnett White, head of a conservative think tank.

And she makes it clear that if she becomes the new EPA administrator, there’ll be some drastic changes. She not only wants to end federal subsidies for renewable energy but also do away with the EPA’s Clean Power Plan.

But White is specific about subsidies, telling reporters after her meeting this week with Trump, “All energy sources would be welcome, but they need to have a level playing field in which to compete. The extent of the subsidy in terms of wind and solar is so high. The economic operation of renewables are totally welcome, but I doubt as a matter of physics if they’ll be able to power mega cities. They’ve been subsidized since the early 1990s and should compete on their own terms.”

White also wants some changes made to the EPA’s rules on mercury and the ozone, claiming the agency’s methods to determine the harmful effects of pollutants on humans are “weakened and manipulated.”

White was an energy adviser for the Trump campaign and also is director of the Armstrong center for Energy and the Environment at the Texas Public Policy Foundation.