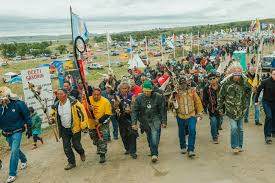 The U.S. Army Corps of Engineers announced Sunday that it will not grant an easement for the controversial Dakota Access Pipeline’s planned route through the Standing Rock Sioux reservation.

The surprise decision is a major victory for protesters who contend the pipeline would contaminate drinking water supplies on the reservation and destroy sacred historic and cultural sites.

“Although we have had continuing discussion and exchanges of new information with the Standing Rock Sioux and Dakota Access, it’s clear that there’s more work to do,” said Jo-Ellen Darcy, the Army’s Assistant Secretary for Civil Works, in a statement. “The best way to complete that work responsibly and expeditiously is to explore alternate routes for the pipeline crossing.”

“Today, the U.S. Army Corps of Engineers announced that it will not be granting the easement to cross Lake Oahe for the proposed Dakota Access Pipeline,” said Dave Archambault II, Standing Rock Sioux tribal chairman. “Instead, the Corps will be undertaking an environmental impact statement to look at possible alternative routes.”

Although the 1,172-mile long pipeline is 92% complete, it appears that Energy Transfer Partners must go back to the drawing board to explore alternate routes for the pipeline. The Dallas-based company previously said it was unwilling to re-route the four-state, $3.8 billion pipeline.

With hundreds of U.S. military veterans converging on the encampment site to rally support and aid protesters, a veterans’ group organizer said tribal elders asked the group to refrain from any confrontations with law enforcement officials.

“For more than three years now, Dakota Access Pipeline has done nothing but play by the rules,” said Energy Transfer Partners, in a press release issued Sunday evening. “The White House’s directive today to the Corps for further delay is just the latest in a series of overt and transparent political actions by an administration which has abandoned the rule of law in favor of currying favor with a narrow and extreme political constituency.”

ETP remains committed to completing the Dakota Access Pipeline project without the necessity of rerouting the pipeline. There is no comment yet as to whether the company will initiate a lawsuit to fight the easement denial.