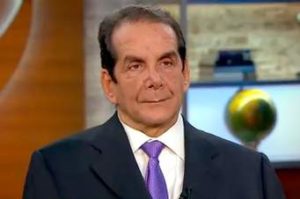 Conservative writer Charles Krauthammer calls Donald Trump’s nomination of Oklahoma Attorney General Scott Pruitt “the most incendiary nomination by far” of those picked by Trump to be leaders in his incoming administration.

In his Dec. 16 column titled “The Trump Cabinet: Bonfire of the Agencies,” Krauthammer wrote, “Pruitt’s is the most important nomination because it is a direct attack on the insidious growth of the administrative state.”

He called it a “dramatic test of the proposition that agencies administer the law, they don’t create it.”

“For some, this reassertion of basic constitutionalism seems extreme,” added Krauthammer.

Here are Krauthammer’s full comments about Pruitt with thanks to the Washington Post Writers Group.

“The most incendiary nomination by far, however, is Scott Pruitt to head the Environmental Protection Agency. As attorney general of Oklahoma, he has joined or led a series of lawsuits to curtail EPA power. And has been upheld more than once by the courts.

Pruitt has been deemed unfit to serve because he fails liberalism’s modern-day religious test: belief in anthropogenic climate change. They would love to turn his confirmation hearing into a Scopes monkey trial. Republicans should decline the invitation. It doesn’t matter whether the man believes the moon is made of green cheese. The challenges to EPA actions are based not on meteorology or theology, but on the Constitution. The issue is that the EPA has egregiously exceeded its authority and acted as a rogue agency unilaterally creating rules unmoored from legislation.

Pruitt’s is the most important nomination because it is a direct attack on the insidious growth of the administrative state. We have reached the point where EPA bureaucrats interpret the Waters of the United States rule — meant to protect American waterways — to mean that when a hard rain leaves behind a pond on your property, the feds may take over and tell you what you can and cannot do with it. (The final rule excluded puddles — magnanimity from the Leviathan.)

On a larger scale, Obama’s Clean Power Plan essentially federalizes power generation and regulation, not coincidentally killing coal along the way. This is the administration’s end run around Congress’ rejection of Obama’s proposed 2009-2010 cap-and-trade legislation. And that was a Democratic Congress, mind you.

Pruitt’s nomination is a dramatic test of the proposition that agencies administer the law, they don’t create it. That the legislative power resides exclusively with Congress and not with a metastasizing administrative bureaucracy.

For some, this reassertion of basic constitutionalism seems extreme. If so, the Obama administration has only itself to blame. Such are the wages of eight years of liberal overreach. Some legislation, like Obamacare, will be repealed. Some executive orders will be canceled. But most important will be the bonfire of the agencies. We may soon be secure not just in our puddles but our ponds.”