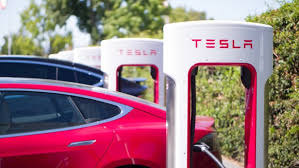 Months before its scheduled delivery and sales of its mass-market Model 3 electric vehicle, Tesla Motors announced Monday that it will discontinue unlimited free use of its 734 global supercharging stations for all vehicles sold after January 1 of next year.

Instead, the automaker will provide 1,000 miles worth of annual credits for use at the supercharger stations. After exhaustion of the credits, Tesla vehicle owners will be required to pay an incremental small fee.

Fee details will be released before the end of this year. The automaker indicated that charging would cost less than the price of a full tank of gasoline. Prices could fluctuate over time and vary by regional electricity costs, according to the company’s supercharging program update issued on Monday.

Tesla is currently the market leader for electric vehicles. Tesla owners charge their cars at home more than 90 percent of the time, according to company officials, with superchargers utilized for trips or additional range. The estimated cost to fully recharge a Tesla 275-mile battery at home is estimated at less than $10 based on an average U.S. electricity price of 12.9 cents per kilowatt hour.

The supercharger stations can provide vehicles with 170 miles of range in 30 minutes. Many of the supercharging stations are highly concentrated in populated corridors along the East and West Coasts.