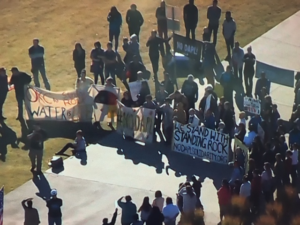 Dozens of Oklahomans supporting the Native American protest of the Dakota Access Pipeline in North Dakota joined others nationwide on Tuesday in staging their own protests.

Oklahoma City protesters, fewer than 100,  gathered at the SkyDance Bridge over Interstate 40.

While nearly most of the $3.8 billion, 1,172-mile pipeline is complete, the Texas developer lacks only to drill and lay the pipeline under the Missouri River near land owned by the Standing Rock Sioux tribe. The tribe contends a leak under the river would devastate its drinking water supply.

The supporting protests were nationwide and came on the same day that the United Nations issued a statement calling out U.S. security forces for using violence against protesters peacefully opposing the construction of the pipeline in North Dakota.

The UN’s special rapporteur, Maini Kiai, a reputed human rights lawyer from Kenya was critical of what he called “the inhuman and degrading conditions” those arrested faced in jail, according to the Washington Post.

Others at the U.N. endorsed his statement that security forces had used unjustified force in handling hundreds of protesters.

“Protesters say they have faced rubber bullets, tear gas, mace, compression grenades and beanbag rounds while expressing concerns over environmental impact and trying to protect burial grounds and other sacred sites of the Standing Rock Sioux Tribe” on whose land the ongoing pipeline construction is taking place, according to the statement provided by Kiai’s office.

The statement notes that Kiai acknowledged that some protesters had resorted to violence, too, but that the response of security officials was disproportionate and targeted protesters who were doing so peacefully, reported the Post.

The pipeline is the project of Dallas-based Energy Transfer Partners and is designed to carry Bakken oil in North Dakota, across South Dakota and Iowa and to an Illinois refinery.