Cushing will have to do it alone 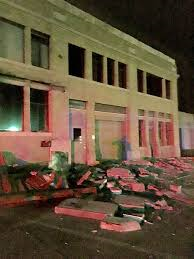 The city of Cushing, rocked by a 5.0 magnitude earthquake will have to make repairs without any federal help.

City leaders were recently informed the city did not meet qualifications for assistance from the Federal Emergency Management Administration.

“We did not meet the threshold to receive any FEMA funds nor any state emergency funds from my understanding,” said Cushing Assistant City Manager Jeremy Frazier in an interview with OK Energy Today.

The Nov. 6 quake was felt in Omaha, Nebraska and Little Rock, Arkansas and is believed to have been caused by injection well activity. After the quake, the Corporation Commission ordered reductions in dozens of wells in the area.

“We are just trying to get back to normal here and lots of repairs are going on locally, mostly by individuals that owned the business or the building being repaired,” added Frazier.

Adding to the problem is that the city suffered some minor tremors following the earthquake.

“Caused additional damage since that point to some buildings that were already partially damaged in the downtown area,” said Frazier.

It was Payne County Emergency Manager Jeff Kuhn who learned Cushing did not qualify for disaster help.

“Very few even had earthquake insurance and only one had good insurance,” Kuhn said in an interview with the Enid News and Eagle. “The others I’ve talked to either had high deductibles like $20,000 or couldn’t get it because of the waiting period after there’s an earthquake.”