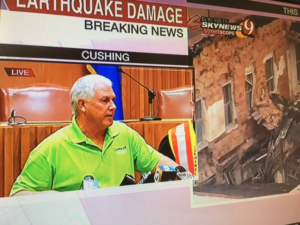 Cushing city leaders say it could be another day or two before they’re able to make a total assessment of damage from the 5.0 magnitude earthquake that hit Sunday night.

An estimated 40 to 50 buildings were damaged, some extensively and at least one, according to aerial footage indicated it had collapsed and was destroyed. Most of the damage was downtown where buildings are nearly a century old.

‘We’re real fortunate along that line,” said City Manager Steve Spears. “Coulda been walking downtown during a busy time of day and we could have had a lot worse situation.”

Several people were attending the movie theater when the quake hit and the ceiling collapsed but no one was hurt.

“Last night till today, we had only one injury,” explained Fire Chief Kris Fritzler. “it was a walk-in to the public safety center. We were able to help him and get him to the hospital.”