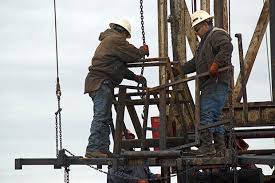 The latest oil and gas rig count from Baker Hughes shows the national count increased by four in the past while the number in Oklahoma remained the same as last week.

Oklahoma’s count stayed at 73 while the national count added up to 557 active oil and gas rigs. That’s a decline of two oil rigs to 441 while the number of gas rigs increased by six to 114.

Compared to a year ago, the rig count remains 218 below the 775 reported one year ago by Baker Hughes. The oil rig count is still down 137 from a year ago while the number of gas rigs is down 83 over the past year.

Oil plays in Oklahoma reflected a loss of one in the Mississippian where two rigs were reported. The Ardmore Woodford has no active rigs while the Arkoma Woodford is said to have four rigs. The Granite Wash remained at 10.

Of surrounding states, Texas increased its count by two to hit 256. Louisiana remained at 46. New Mexico’s count slipped by two to hit 32 while the count in Colorado fell by three, reaching 17. Baker Hughes again reported no active rigs in Kansas but the Red Top Rig County put out by the Independent Oil and Gas Service reported a total count of 42 active rigs. The Red Top report said it was an increase of six compared to a week ago.