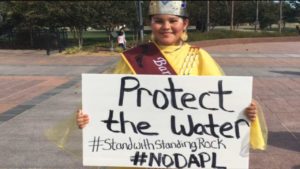 One of those who ended up behind bars during last week’s Native American-led protests of the Dakota Access Pipeline in North Dakota was Oklahoma Caddo Nation chairwoman Tamara Francis-Fourkiller.

She was said by family members to be visiting the Standing Rock Sioux to advise them during negotiations with the construction team building the $3.8 billion pipeline that runs from North Dakota to South Dakota, Iowa and Illinois.

Her sister, Loretta Francis says Tamara Francis-Fourkiller is considered an expert on sacred burial grounds according to a report at News 9.

“Remains were being desecrated at this pipeline, so they asked a bunch of people to come up there, so there’s a big conference,” explained Francis. She said her sister decided to tour the protest camps and got caught up in the protests and subsequent arrests.