GE in Talks to Merge with Baker Hughes 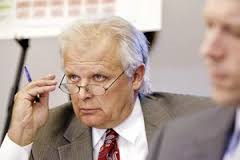 State Rep. Richard Morrissette, a critic of the state’s handling of how to respond to the growth in earthquakes in Oklahoma plans another news conference in the coming days.

The Democrat from Oklahoma City plans a news conference Nov. 2 at 11a.m. at the state capitol.

The announcement said it will be held “to hear from Oklahomans who have experienced property damage from earthquakes.”

Just this week, Morrissette, a lame-duck legislator took part in a State House Committee’s interim study on wastewater injection wells and earthquakes. He has also been a vocal critic of Gov. Mary Fallin and Corporation Commissioners, saying they responded too little and too late to the surge in quakes.