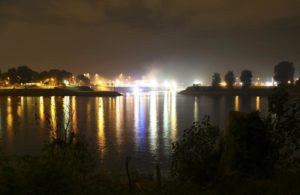 Divers have recovered the body of a third victim in Monday night’s explosion and fire at chemicals maker BASF’s biggest production site in Germany. Another is still missing, according to BASF.

The blast happened on a supply line connecting a harbor and a tank depot on the Ludwigshafen site which is about 80 kilometers or 50 miles south of Frankfurt.  A fire broke out immediately and BASF and the city of Ludwigshafen urged residents in the surrounding neighborhood to stay indoors and keep their windows and doors shut.

The company said it was unclear what caused the explosion and BASF, the world’s biggest chemicals company wasn’t sure what financial impact the explosion would have.

But the company closed 14 operations including its two steam crackers which are large units that make basic chemical components.

The Ludwigshafen site is described as the world’s largest chemical complex covering four square miles and employing 39,000 workers. It is located on the Rhine river and receives many of its raw materials by ship.