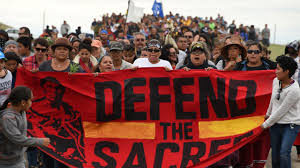 Now the U-N is getting involved in the oil pipeline fight in North Dakota as the U.N.s special envoy for the rights of indigenous people is calling for a halt to its construction.

Victoria Tauli-Corpuz in Geneva, Switzerland wants work stopped on the Dakota Access pipeline, calling it a threat to drinking water supplies and some of the sacred sites of the Standing rock Sioux Tribe.

“The tribe was denied access to information and excluded from consultations at the planning stage of the project and environmental assessments failed to disclose the presence and proximity of the Standing Rock Sioux reservation,” said the envoy in a statement.

But one North Dakota federal doesn’t think all of the Indian protesters are as pure of heart as they claim to be, saying “the mindless and senseless criminal activity of the hooligans that chose to accompany the protest movement” acted out by a small and fractious percentage of the entourage at the Lake Oahe site along the pipeline.

Judge Daniel Lee Hovland said some of the protesters engaged “in mindless and senseless criminal mayhem,” including vandalizing and defacing construction equipment, trespassing, obstruction work on the pipeline and verbal taunting, harassing and showing disrespect to members of the law enforcement community.”

The judge said it’s clear the protesters have already caused millions of dollars in damage and “to suggest that all of the protest activities to date have been “peaceful” and law-abiding defies common sense and reality.”

He said many of the instigators are from out-of-state and have political interests in the pipeline protest and hidden agendas vastly different and far removed from the legitimate interests of Native Americans of the Standing Rock Sioux Tribe.