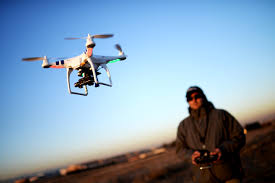 From fighting fires to checking pipelines, drones are quickly becoming a part of commercial enterprises throughout Oklahoma and the country. But what about privacy laws and drones?

“Do we need privacy laws?  Like never before,” declared Stephen Henderson, a law professor at the University of Oklahoma who testified this week before an interim State Legislative study on drones. “This is not easy, and for the most part the law is simply not yet declared.”

He said while the Federal Aviation Administration has set policy on air space, privacy concerns were not something it addressed. He said in effect the law is undeclared.

“Over the last decade, courts have begun to articulate a constitutional right to record, but so far it’s been limited to the recording of police in the public performance of their duties, which is the easiest case. And it’s not even yet considered that as to recording from the air.”

Henderson raised a range of possible public policy approaches including giving greater emphasis to privacy concerns versus first amendment concerns.  He said the most restrictive legislation, a ban of all non-consensual drone flight, would be the most likely to be struck down by the courts.

The hearing was held by the Senate Public Safety Committee at the request of Sen. Frank Simpson.

“I’ve been studying this issue for months and I am increasingly aware of the complexities involved. We have laws on the books meant to address privacy concerns, including laws against trespassing, but now we have to think in new terms—aerial trespassing is a phrase we heard us,” said the Republican legislator from Spring. “I think this is a first step toward insuring we take a comprehensive look at the issues and the dynamics involved.”