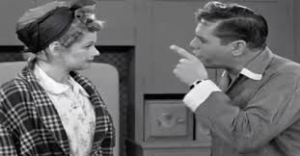 As Desi always told Lucy on the old I Love Lucy TV show, “you got some splaining to do.”  And that’s clearly the case at the University of Oklahoma and the Oklahoma Geological Survey where state funds were used to hold an earthquake forum from which reporters were given the boot.

The story, as laid out by reporters at the investigative website, “The Frontier” began when the state-sponsored workshop on quakes was closed last week. The forum featured not only OU and state officials but representatives from the oil and gas industry.

J. Mike Stice, dean of OU’s Mewbourne college of Earth and Energy maintains the decision to close the conference was made by the Oklahoma Geological Survey and not the University.

He told The Frontier the decision to close the event to the public was made in advance “so that it could be constructive and not distracted by any media hoopla.”

Stice also happens to sit on the board of directors of SandRidge Energy and is a former executive with Chesapeake Midstream Partners.