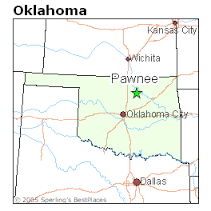 “It shook the doors open from the freezer and knocked ice cream on the floor.”

Just as Oklahomans were praising the plan of the Oklahoma Corporation Commission to cut down on the number of wastewater injection wells and reduce the occurrences of strong earthquakes, the state endured one of its strongest quakes ever on Saturday morning. One that left at least one person injured and sent to the hospital.

It was a magnitude 5.6 earthquake with an epicenter near Pawnee, that was felt in numerous surrounding states, drawing reaction from Omaha, Nebraska; Kansas City, and Dallas. It struck at 7:02 a.m. and in many homes early that morning, it started as a slight rattling of windows, then grew until one’s entire home was rumbling and shaking. It wasn’t just the vibrations but the noise grew along with the shaking of a home.

The 5.6 earthquake was the same strength as the 2011 quake in Prague that damaged homes and injured some residents and left significant damage at St. Gregory University in Shawnee.

It caught tv news anchors by surprise as they were in the midst of their live newscasts.

In Pawnee, one employee of a grocery store was stunned as things were knocked from store shelves. The most significant damage was in Pawnee where bricks were knocked from the side of the historic Pawnee County Bank. One resident, a man, was hurt while protecting a child from falling bricks of a fireplace.

“We feel very fortunate that was the only reported injury,” Mayor Brad Sewell told The Oklahoman.

The historic Pawnee Bill Mansion suffered some minor damage including structural problems for the building. Otherwise, officials reported one vase was destroyed.

A state of emergency exists upon orders of Gov. Mary Falliln. Immediately, the State Transportation Department launched an inspection of 180 state bridges within a 30-mile radius of the epicenter and all were declared safe.

Officials at Oklahoma State University conducted an immediate inspection of T-Boone Pickens football stadium in Stillwater prior to the first home-game of the season. No damage was discovered.

The Corporation Commission responded with an order to close all injection wells within a 725-square-mile area that injection salt water into the Arbuckle. They are to be closed over the next 10 days.