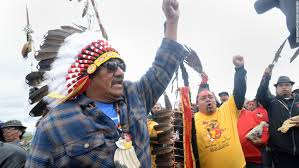 While protesters led by the Standing Rock Sioux continue to vandalize construction equipment in a protest of the Dakota Access oil pipeline in North Dakota, the head of the company says it’s committed to the project.

Kelcy Warren, CEO of Energy Transfer partners told employees in a memo that the pipeline is nearly 60 percent completed and that “concerns about the pipeline’s impact on the local water supply are unfounded.”

“I am confident that as long as the government ultimately decides the fate of the project based on science and engineering, the Dakota Access Pipeline will become operations….So we will continue to obey the rules and trust the process,” said Warren in a written statement to his workers.

Thousands of protesters, led by the Standing Rock Sioux tribe have been fighting the $3.8 billion, 1,172-mile long project for months.

“People are still coming down here and are committed to stopping the project,” said tribal chairman Dave Archambault II.

On Tuesday, while hundreds including Sen. Bernie Sanders demonstrated in Washington, D.C., workers for ETP removed 30 pieces of damaged and vandalized construction equipment from near the protest site.

While the federal government asked EPT to voluntarily stop construction in North Dakota, work remains underway at other parts of the pipeline which will also be located in South Dakota, Iowa and Illinois.

The Associated Press reported that 70 miles northwest of the main protest site, protesters “swarmed” construction workers and two people chained themselves to equipment. Morton county Sheriff’s deputies arrested at least 20 people on charges of criminal trespassing. The two who chained themselves to the equipment face charges of hindering law enforcement and disorderly conduct.

Warren’s memo noted that because of what it called “misinformation” in the news, the company is working to “communicate with the government and media more clearly in the days to come.”

Warren said the company had consulted with more than 55 tribes, including the Standing Rock Sioux, and added that ETP values and respects “cultural diversity and the significant role that Native American culture plays in our nation’s history and its future and hope to be able to strengthen our relationship with the Native American communities as we move forward with this project.”

Archambault said the consultations were one-sided and that “they met with us after their plans were already made.”