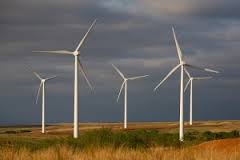 Just take a long drive across the western half of the state of Oklahoma and you’ll see just how much the wind energy industry has grown in the state. And it’s still growing!

While the state is ranked number four nationally for installed wind power capacity, it is soon expected to climb to number three, knocking California out of the position. Oklahoma’s already number three nationally when it comes to construction activity.

And it has the American Wind Energy Association excited, according to a report this week in The Tulsa World.

“We’re really excited to see Oklahoma is building on its legacy as an energy producing state,” said Hannah Hunt, an Association senior industry data analyst in an interview with the World. She said Oklahoma will be a big contributor to helping the wind industry supplying 20 percent of the country’s electricity by the next 14 years.

In Oklahoma, wind provided 18 percent of the state’s energy production last year, not to mention 7,000 jobs.