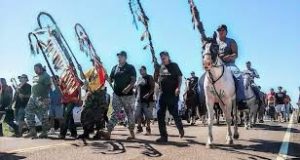 The State of North Dakota has dealt a blow to those Native Americans protesting construction of a nearly $4 billion Dakota Access oil pipeline near their land where they claim burial grounds and other artifacts were present.

A state inspection of the oil pipeline site has found no sign of such Native American artifacts or human remains as the Standing Rock Sioux tribe has claimed in its fight against the line.

Paul Picha, the Chief Archaeologist said in a report this week that seven state archaeologists inspected the 1.3-mile section of the route in southern North Dakota and only some animal teeth and bone fragments were found last week.

Leaders of the Standing Rock Sioux tribe did not respond immediately to the report. Tribal Chairman David Archambault II was critical of the work carried out by crews that had removed topsoil in a two-mile long stretch.

“This demolition is devastating. These grounds are the resting places of our ancestors. The ancient cairns and stone prayer rings there cannot be replaced. In one day, our sacred land has been turned into hollow ground.”

The burial-ground claim was just one of two the tribe had used in attacking the construction. The tribe had also charged the pipeline had the potential to harm its drinking water source.