Saddlehorn Pipeline from Platteville to Cushing is Operational

No Quake Damage at Cushing Tank Farm—-Operations Continue as Normal 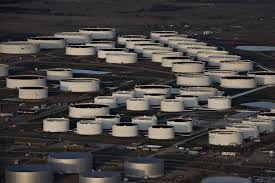 So far, so good when it comes to any damages incurred at oil and gas operations in Oklahoma following the magnitude 5.6 earthquake with its epicenter near Pawnee.

The Governor’s office indicates oil storage and pipeline operations at Cushing just 25 miles south of Pawnee were found to be undamaged.  Operators of some of the storage facilities gave the all clear after surveying their tanks and lines.

Bloomberg News reported that as of last week, storage levels at Cushing stood at nearly 64 MMbbl per information from the U.S. Energy Information Administration.

“Following the earthquake, Enbridge employees were directed to conduct visual inspections of tanks, manifolds and other facilities,” Bloomberg quoted spokeswoman Jennifer Smith who responded by email. “The Cushing terminal is currently operating normally.”

Bloomberg also quoted a spokesman at the Cooper Nuclear Station in Brownville, Nebraska  that the quake was felt there. It is located 350 miles north of Pawnee. Operations were unaffected and there was no damage.