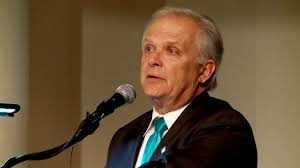 Even though he’s a lameduck legislator, Oklahoma City Rep. Richard Morrissette is pushing ahead with his attacks on the oil and gas industry and its use of wastewater disposal wells and their apparent causes of earthquakes. He’s highly critical of the state taking out-of-state water, joining in the criticism offered by other legislators.

“Apparently Oklahoma has become a favored dumpsite for energy producers in other states,” said Morrissette in a story on the McCarville Report. He cited figures showing 2.44 million barrels of saltwater from Texas, Arkansas, New Mexico, Colorado and Kansas  were injected last year into Oklahoma disposal wells. Those figures came from the Oklahoma Corporation.

Most came from Texas and it totaled 2.1 million barrels. Kansas was second highest at 278,468 barrels of saltwater. The subsequent earthquakes and the number of disposal wells in Oklahoma prompted one Kansas newspaper to recently criticize the state and that prompted Rep. Morrissette to offer his own responsel

“The Oklahoma Corporation Commission could, and should, have done much more and much faster than it did to curtail oilpatch activity in our state’s seismically active counties,” said Morrissette. “But our neighbors to the north have had a role in our earthquake problems,” he added.

Morrissette’s not giving up in his moves to find a solution. He has an interim legislative study slated for Oct. 25 at the state capitol where he will explore options for recycling oilfield wastewater instead of injecting it back into the earth. The hearing will be held by the State House Committee on Energy and Natural Resources It will be held at 9 a.m. in State Capitol room 412-C.