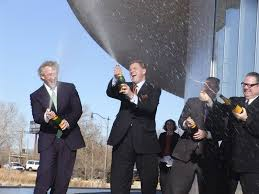 The nearly 4,700 bottles making up the collection of the late energy leader Aubrey McClendon will be sold at auction on Saturday.

The auction, expected to raise $7.5 million for the McClendon estate, will begin at 8:30 Oklahoma time as auctioneers at Hart Davis Hart Wine company begin the sale of 1,058 lots containing 4,699 bottles of wine.

Ben Nelson, president of the Hart Davis Hart wine Company expects the auction to last most of the day.

“We’ll never see an auction like this again,” he told Forbes magazine, describing McClendon “at one time the biggest buyer of classified growth Bordeaux in the world.”

Nelson pointed out that sales held in 2009 and 2010 by McClendon raised nearly $5 million.

McClendon died in a traffic accident in March in Oklahoma City. Since then, more than $500 million in claims have been filed against his estate in probate court.