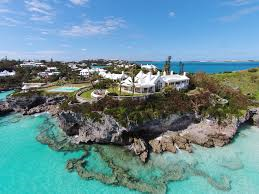 Aubrey McClendon’s widow is attempting to sell their luxury home in Bermuda for nearly $14 million.

Called Winsor House, it sits on a cliffside and is officially listed for sale for $13.9 million.  Already, it is under contract according to the Royal Gazette. The paper also said that despite the huge price tag, the house needs major renovations or else it could be demolished and replaced with a new home.

Katie McClendon is the heiress of the Whirlpool appliances family and the wife of the former Chesapeake Energy chief who died in the crash of his SUV in March.

Sinclair Realty in Bermuda has listed the home, describing it as “one of the very best beachfront settings in Bermuda.” It has a two-level garage and two-level guest cottage and an annual rental value of $216,000.