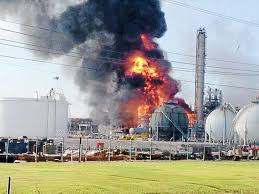 A jury in Plaquemine, Louisiana awarded $13. million in damages to four workers hurt in the 2013 blast that ripped through the Olefins Geismar plant owned by Williams Companies of Tulsa. The four were among 114 who were hurt n the blast that also killed two other workers.

The Iberville Parish jury deliberated nearly five hours before returning with the verdict that concluded the company, several plant officials and the parent company were negligent and also knew with certainty the deadly fire could happen. Jurors ruled Williams was 95 percent responsible for the explosion and Williams Olefins was 3 percent to blame, according to a reporter in the Baton Rouge Advocate.

“For a month they were trying to shift blame onto their shell company and I’m glad the jury saw right through it,” said Kurt Arnold, an attorney for the plaintiffs.

One percent of the blame for the blast was put on plant official Parker Tucker and one percent was assigned to plant supervisor Larry Bayer. Another plant official, Erick Comeaux was absolved.

Williams Cos. said it will appeal the verdict.

“Nothing about the tragic accident at the Williams Olefins facility in Geismar on June 13, 2013 was intentional. We believe there is insufficient Louisiana case law that supports our legal position and we will appeal the jury verdict rendered in the 18th Judicial District Court.”