Hamm Objects to Being Called the “F” Word 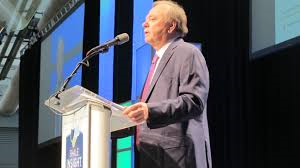 Oklahoma oilman Harold Hamm certainly got the attention of an energy conference this week in Pittsburgh, Pennsylvania when he told the crowd he didn’t like being called a “fracker.”

“I’m not putting up with it,” declared Hamm in his keynote address to the Shale Insight conference. “It’s time to stop. We have a very proud and dignified industry. Don’t let them call you the ‘F word.’ I’m not going to put up with it,. And you shouldn’t either.”

Hamm said drilling opponents and environmentalists added a “K” to FRAC and turned it into a dirty word. The founder of Continental Resources said what America’s oil and gas industry did over the past eight years was “the single most-defining event in the world.”

He said it will also reshape the next 50 years and give cheap energy to the U.S. Hamm was also critical of Hillary Clinton for her vow to stop fracking and said if she gets into the White House, she will become an adversary for the industry just like President Obama has been to coal.

“We don’t want to wait with oil and gas until we’re out of business to try to fight back. It’s too late then—you’ve got to get ahead of it so we have to step up now,” warned Hamm. “What we’re seeing here is a complete and total disregard of what made America great. The one thing we always had working for our country—and that was a very strong rule of law.”