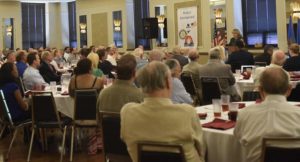 The slumping economy in Oklahoma and the accompanying downturn in the oil and gas sector have obviously been a weighty concern for Gov. Mary Fallin, something she reflected on this week during a speech to the Enid Rotary club.

“I know it hasn’t been an easy time for Enid,” stated the governor, according to a report in the Enid News and Eagle. She went on to blame the problem on what has happened to the oil and gas industry in the past two years.

“There’s so many important needs in the state but when you go from $107 a barrel of oil to $26, that’s a large drop and when you do that consistently now, in October it will be two years since we started seeing the slide in oil prices—it really does take a toll on Oklahoma’s economy. And certainly on a lot of certain services we need to provide and want to provide.”

She told the Rotary club members the most recent legislative session and budget work was “one of our toughest.”

“Legislators and I had a tough job trying to figure out how to put our money to the most important places, prioritizing our spending on those areas we mentioned a few months ago and putting money toward programs we know work and not just those we hope work but really create efficiency and effectiveness in the programs and services we’re delivering.”