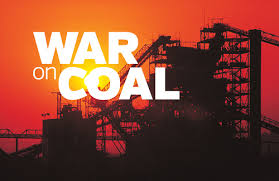 MORGANTOWN, W.Va. (AP) — President Barack Obama’s energy secretary said Monday that the administration isn’t waging a “war on coal” and is working to maintain coal as an important part of a low-carbon energy future.

Especially in southern West Virginia, mines are continuing to close and miners keep losing good-paying jobs, with few other employment options available. The administration is infusing money into communities where the coal industry has withered to develop different economic opportunities, Moniz said.

“Plain and simple, ‘War on Coal’ is not what this administration has as a policy or has done,” Moniz told The Associated Press. “It starts with — make no bones about it — we and the world are heading to a low-carbon future.”

Republicans and some coal-state Democrats have used the phrase “war on coal” to describe President Barack Obama’s policies, particularly that of limiting carbon emissions from coal power plants to combat global warming. Moniz said the low cost of natural gas has dealt coal the biggest competitive blow in energy production.

A legal challenge that has temporarily stalled enactment of carbon limits should be decided in the first half of 2017, Moniz said If the standards are upheld in court, he said they would begin being implemented in stages in 2022.