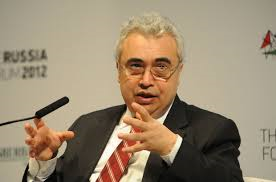 The head of the International Energy Agency predicts global oil output will exceed demand until late next year.

The prediction comes from Fatih Birol who is Executive Director of the IEA.

“We don’t see the oil market re-balancing until late 2017 provided there’s no ‘major intervention’,” he said in an interview this week with Bloomberg Television in Algiers.

He told Bloomberg oil demand growth has been weaker than expected. The agency had projected demand growth of 1.3 million barrels a day in 2016, which is less than the 1.6 million in 2015. The IEA’s prediction will slip to 1.2 million a day in 2017.