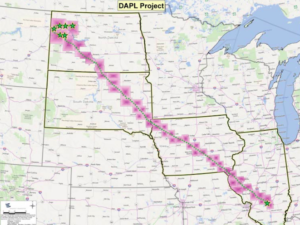 While thousands of Indians and environmentalists are camped in North Dakota fighting the Dakota Access oil pipeline, the D.C. Circuit Court in Washington has heard arguments for and against the project.

It’s where the Standing Rock Sioux tribe took their case after a North Dakota federal judge last week refused to block the $3.8 billion pipeline from North Dakota through South Dakota, Iowa and Illinois.

Energy Transfer Partners based in Dallas urged the Circuit court Wednesday not to block the project near the Missouri River cross. Attorney said to undo a district court order allowing the construction to continue would be “manifestly unfair”.

A decision might take months. The original lawsuit challenging the project was filed by the Standing Rock Sioux tribe in July and accused the U.S. Army Corps of engineers for failing to address the tribe’s concerns and violating federal permitting law. Just an hour after the federal judge refused last week to stop construction, the Obama administration ordered the Army Corps to block construction.