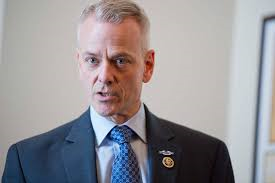 Oklahoma Congressman Steve Russell is out with his latest “Waste Watch” report, one detailing $10 billion in what he calls wasteful government spending including hundreds of thousands spent on off-roading trails in West Virginia.

But the Republican Representative (5th Dist. Ok.) led off his list with the U.S. paying $1.7 billion in legal settlement to Iran, a country that promptly turned around and ‘transferred the $1.7 billion payment to the Iranian military.”

Rep. Russell pointed out how the Iranian military is openly fighting in the Syrian civil war on behalf of the dictatorship of Bashar al-Assad and the Iranian government has long been known to actively support terrorist activity worldwide, including against U.S. service members in Iraq.”

Third on his list was how the Federal Highway Administration paid $760,000 for off-roading trails in West Virginia.

“Since 2011, the state of West Virginia has directed at least $760,000 in federal money to the “Hatfield-McCoy trails,” a system of over 700 miles of off-roading routes in the mountains of southern West Virginia,” wrote the congressman.

Second on the list was how the U.S. Marine Corps was forced to spend $22 million to relocate a thousand tortoises from the Mojave desert where it was making a training area for live-fire exercises.

Another wasteful spending project, according to Rep. Russell was the US Agriculture Department’s $701,117 spent on funding beer festivals in Europe and Japan.