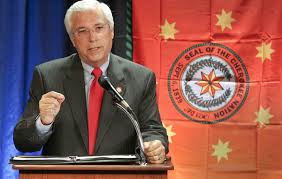 The Standing Rock Sioux tribe fighting the construction of the Dakota Access oil pipeline across North Dakota and three other states is getting support from Oklahoma’s Cherokee Nation.

The Cherokee Nation’s Tribal Council voted this week in favor of a resolution of support for the Standing Rock Sioux Tribe’s protest of the pipeline. Chief Bill John Baker had earlier voiced his support for the protest and displeasure with the actions of a federal judge who refused to block construction.

“It’s disappointing that a federal court declined to halt construction of the Dakota Access Pipeline, which may have severe negative impacts on the Standing Rock Sioux’s main water source, ancient burial sites and other sacred areas,” said Chief Baker. But he supported the response of the U.S. Army Corps of engineers and the Department of Justice as well as the Department of Interior in intervening.

“We are grateful this administration—intervened to do what is right in this matter–defend the rights of a sovereign tribal nation to intervene in commercial practices that may harm the Standing Rock people and will most certainly harm the land and sacred sites they have occupied since time immemorial.”

“The Standing Rock Sioux are the original inhabitants of what is now North Dakota, and we applaud this administration for recognizing their inalienable right to self-determination of their tribal homelands. While we are troubled this situation even reached this level of contention, we are grateful that it is now sparking meaningful conversations never held at this level of government – conversations that actually take into consideration the needs and wishes of tribes when it comes to infrastructure projects such as the Dakota Access Pipeline.

“We once again congratulate President Obama on his proactive stance toward protecting the people and resources of Indian Country. We also want to recognize the Standing Rock people and Natives from all over the United States who have joined in solidarity for months to halt this dangerous pipeline. We admire their strength and their resolve. The Cherokee Nation will continue to stand with Standing Rock.”