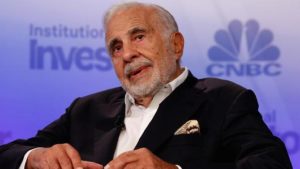 Billionaire investor Carl Icahn has dumped nearly half of his holding in Chesapeake Energy, going from 9.4 percent ownership of the Oklahoma City company down to 4.6 percent.

He explained in a statement on Monday that it was done for tax purposes.

“We believe that over the last few years Doug Lawler and his team have done an admirable job, especially in light of the circumstances. We reduced our position to recognize a capital loss for tax planning purposes,” Icahn said.

A filing by Chesapeake Energy with the Securities and Exchange Commission showed the sale involved more than 20 million shares. The first sales were on Sept. 13 and the last occurred on Monday involving Icahn Partners and Icahn Master. The prices per share ranged from a high of $7.56 to a low of $7.06. The largest one-time sale totaled 11,865,252 shares by Icahn Partners in one of the six sales made on Monday.