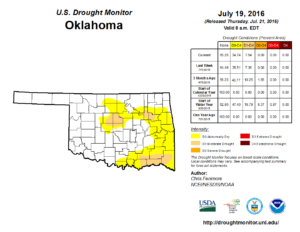 Expect Oklahoma to continue baking a few more days with temperatures hitting 103-104 degrees in northwestern Oklahoma, right in the area where oil and gas drilling operations have seen slight increases in activity.

He says the lack of rainfall is only increasing the growth of the drought.

“The heat and lack of rainfall are only enhancing the current flash drought across parts of Oklahoma, which began across northern Oklahoma but has now reared its ugly head down south,” wrote McManus in the Thursday Mesonet report. “The new U.S. Drought Monitor report does indeed show moderate drought getting a toehold down in far southeastern Oklahoma and drought’s precursor, abnormally dry conditions, spreading out even farther.”