$61 billion in Bankrupt Oil and Gas Firms……More to come? 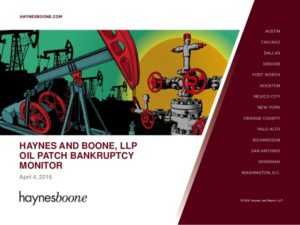 Oil and gas company bankruptcies as of June 30, 2016 have reached more than $61 billion in debt, according to an update from the bankruptcy law firm of Haynes and Boones in Texas and its Oil Patch Bankruptcy Monitor.

The count still stands at 85 bankrupt North American oil and gas producers since early 2015 and includes two bankruptcy filings in Oklahoma with $138,654,484 in debts. They include Osage Exploration and Development which filed in February with more than $39 million in debts and Postrock Energy Corporation with $99 million listed debts in its April 1 filing.

Oklahoma City based Chaparral Energy filed in Delaware  on May 9 and listed $1.8 billion in debts.

But the law firm said 43 producers had filed bankruptcy so far this year, representing $44 billion in cumulative secured and unsecured debt.

“Despite the modest recovery in energy prices, all indications suggest many more producer bankruptcy filings will occur during 2016,”stated the law firm’s website.