Brace for More I-35 Traffic Slowdowns in southern Oklahoma

Oakland Says Not in Our Backyard to Coal Shipments

Tesoro Picks up Another Refinery in North Dakota 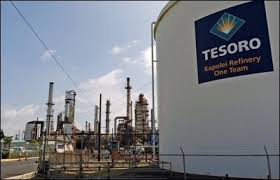 Headquartered in San Antonio and with more than 6,000 employees, the company acquired the refinery in Dickinson.

The operation started selling fuel last year but lost more than $7 million in the first three months of the year. It was owned by North Dakota-based MDU Resources and Indianapolis-based Calumet Specialty Products Partners. Together, they spent $430 million on the Dakota Prairie Refinery but after losses, MDU bought out Calumet no Monday and then sold it to Tesoro for an undisclosed price.

Tesoro operates six refineries and has operations in 18 states, but none in Oklahoma.