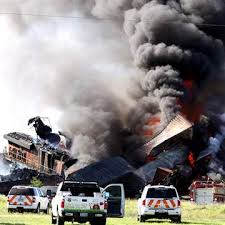 Federal investigators were on the scene Tuesday of the fiery head-on collision of two Burlington Northern Santa Fe freight trains in the Texas Panhandle.

“I don’t know how anyone survived,” remarked Billy Brown, a farmer who lives in the area. “It’s terrible. I’ve seen a number of train wrecks but I’ve never seen one like this.”

He told KFDA-TV in Amarillo he saw a fireball erupt after the collision.

The lead locomotives were of intermodal trains and the crash involved four BNSF workers. Federal Railroad Administration investigators were on the scene within hours, according to agency spokesman Matthew Lehner.

The crash was so violent, it caused several derailed boxcars to catch fire, prompting the evacuation of some nearby Panhandle residents because of spread the fire could spread.

Residents were also asked to conserve water because of a shortage of water used by firefighters on the scene.