Not One Mining Engineer Employed by EPA

A Flood of Subpoenaed Documents for House Committee Investigating WOTUS 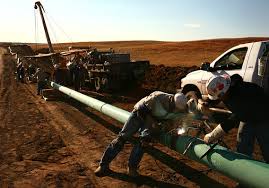 Opponents of a proposed pipeline from Cushing to Longview, Texas plan to voice their concerns at a Monday afternoon meeting of the Norman Floodplain Permit Committee. The developer is the same company responsible for the Santa Barbara, California pipeline spill that led to grand jury indictments on 46 criminal counts.

It is opposition to the Plains Pipeline Red River II pipeline that will cross Cleveland County.  The Oklahoma Sierra Club is fighting the project of Plains Pipeline, a subsidiary of Plains All America, a Houston, Texas based company that owns nearly 37 million barrels of terminal and storage capacity including some at the Cushing Terminal and an estimated 15,000 miles of crude oil pipelines.

Native Americans have joined the opposition.

“The Plains Pipeline has not produced an Environmental Impact Statement,” asserted Casey Holcomb, Chair of the Red Earth Group of the Sierra Club. “This company has given us no information on how local waterways and wildlife are going to be impacted. They are also trespassing on Native American tribal lands without any kind of public consultation.”

Opponents of the project plan to attend the Norman Floodplain Permit Committee (who will meet June 20th at 3:30pm, 201 West Gray, Norman Municipal Complex – Conference Room D) to request open public meetings and environmental documentation be produced before this project is allowed to continue.

“Even in the best-case scenarios using the most advanced pipeline technology, pipelines fail and rupture,” said McCrary.