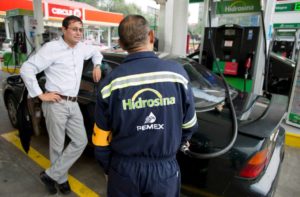 After nearly 80 years, Mexico is getting its first gas station that isn’t owned or operated by the government-owned Pemex corporation.

Two companies recently opened three gas stations under their brands, a result of energy reforms passed two years ago by the federal government.

The company, Hidrosina opened one in Mexico City while the other firm,La Gas opened two stations in other cities.

Hidrosina is a company founded in 1992 and has operated more than 30 gas stations in Mexico City and the country under the Pemex name.

“This is the first test we want to do with 20 stations this year and next year in Mexico City,” explained Victor Ruiz Inarte, director of operations for Grupo Hidrosina in an interview with the Associated Press.

Gulf Oil based in the U.S. announced earlier this year it planned to open its first four gas stations in Mexico in June and July.