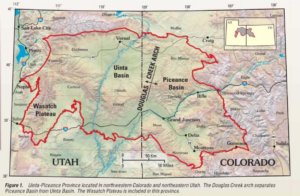 It’s what government and industry experts recently said in Denver, explain the Mancos Shale formation in the state’s Piceance Basin holds an estimated 66.3 trillion cubic feet of gas. That’s a huge increase from the 1.6 trillion estimate made in 2003.

The reason for the increased prediction?  Newer data from commercial drilling companies and new research. The Piceance Basin spans much of western and northwestern Colorado, but much of it is also federal land managed by the Bureau of Land Management.

David Ludlam, executive director of the West Slop Colorado Oil and Gas Association recently told the Associated Press the new estimate might make the Piceance Basin the second-largest natural gas reserve in the U.S. after the Marcellus Shale formation in Pennsylvania. The Marcellus has an estimated 84 trillion cubic feet of gas.