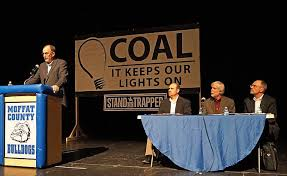 At least one electric cooperative serving some Midwestern states makes it clear, it doesn’t think the Environmental Protection Agency’s controversial Cean Power Plan is the way to go. And it’s almost as thought a government “catch 22” forced it to use coal to generate electricity.

He told the Senate Committee his group relies heavily on coal and natural gas to produce electricity and those are energy resources heavily targeted under the Clean Power Plan.

“Tri State has fewer customers per mile and we have fewer customers from which to spread those costs,” said McInness. “When Tri-State needed generation, coal was our only option.”

He explained that in the 70’s and 80’s when the cooperatives were expanding the Power Plan and Industrial Fuel Act was passed by Congress. Construction of natural gas and oil plants wasn’t allowed.

“We had to choose between nuclear and coal. We chose coal because it was  proven and it was affordable,” said McInness.

Listen to his testimony.