Oklahoma U.S. Sen. Jim Inhofe says the chemical safety bill approved by the Senate and sent to the President to be signed into law is an historic piece of environmental regulatory reform.

The Frank R. Lautenberg Chemical Safety for the 21st Century Act awaits the President’s signature after the Senate approved it Tuesday with a voice vote.

Inhofe called it a “great example of the Republican-led Congress working for the American people by enacting meaningful and commonsense legislation.”

He originally introduced the Toxic Substance control Act in January 2015 in the 114th Congress. At the time, Sen. Inhofe called the reform one of his top 5 priorities as chairman of the Senate Environment and Public Works Committee.

“This soon-to-be law will protect and support millions of domestic jobs and spur economic growth for decades to come by providing regulatory certainty to encourage new manufacturing investment here at home, on American soil,” said Inhofe. “It will safeguard interstate commerce while also protecting public health. It will strengthen transparency and oversight, holding EPA accountable to Congress and the American people, while also protecting small business from bureaucratic hurdles and burdensome mandates.” 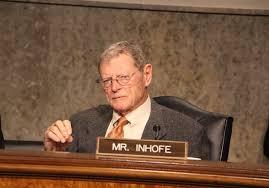